Managing your package architecture for a Salesforce platform product is a major challenge not because it's difficult as such, but because in many cases your decisions must be made very early in the lifecycle of the product and are very difficult or even impossible to change. This challenge is especially prominent when designing extension packages, which build upon existing managed packages. The bridge package pattern is a package architecture that factors dependency into a tiny, minimal second package whose only job is connecting two other packages that are independent of one another. Think of it like a junction object for managed packages.

The bridge package pattern can be counterintuitive, but offers long-term value. We'll explore it through an example product called Massive Events.

Understanding the value of the bridge package pattern requires that we get into the weeds of managed package dependency and manageability rules. Let's dig in to how this plays out in the journey of Massive Events from product design to delivery.

At Massive Events, you're building a new managed package product to help organize galas, fundraising events, and classes. Integration with the Nonprofit Success Pack (NPSP) is a key objective for your product: nonprofit customers will need to connect event income to General Accounting Units, apply Action Plans to event attendees, and cultivate participants through a donor pipeline. 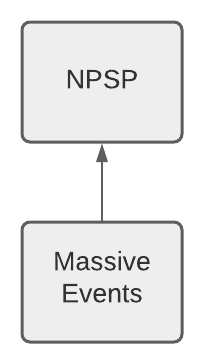 This design is not wrong. Extending managed packages to provide new functionality is a common and valuable strategy for developing an AppExchange product; it encourages end users to compose multiple products to cover the full breadth of their needs. But here's the low-level technical blocker that can ultimately make this architectural choice dangerous: in a subset of cases that is challenging to define completely, it is impossible to remove a dependency between an extension package and its core package.

The dependency between Massive Events and NPSP is established by the points of connection between components we mentioned above. When Massive Events Apex calls NPSP Apex, that's a dependency. Likewise, when Massive Events adds schema to NPSP objects or references those objects in its own schema, another dependency is created. Once those component-to-component dependencies exist, they're under the control of the manageability rules applied to the components in the extension package that reference the core package. If manageability rules don't allow the package developer to change or delete the component that contains the cross-package reference, the dependency is permanent.

The upshot of all this is that Massive Events may always require the Nonprofit Success Pack, in every customer org. And whether or not that's the case is determined by innocuous technical decisions made during implementation, like whether or not to reference an NPSP component in a Flow (which cannot be deleted).

Massive Events might say "So what? We're a nonprofit-focused product; requiring NPSP is not a problem for our package". And that's fine too, but it's a long-term business risk that the company must evaluate. What if their clients start asking to buy Massive Events for EDA? Or Massive Events for a vanilla Sales Cloud org? Massive Events could be leaving long-term revenue on the table by designing their package in a way that won't allow them to pivot, or incurring significant costs if they need to maintain multiple copies of the same codebase to support these divergent customer bases.

The solution to this challenge is the bridge package pattern. It's a way of structuring the application into packages in a way that allows Massive Events to isolate their dependency on NPSP from the core functionality of their package into a separate bridge, leaving the door open to later pivoting the core application to support other types of Salesforce org.

The package structure for Massive Events would look like this under the bridge package approach. Again, arrows denote the direction of dependency relationships. 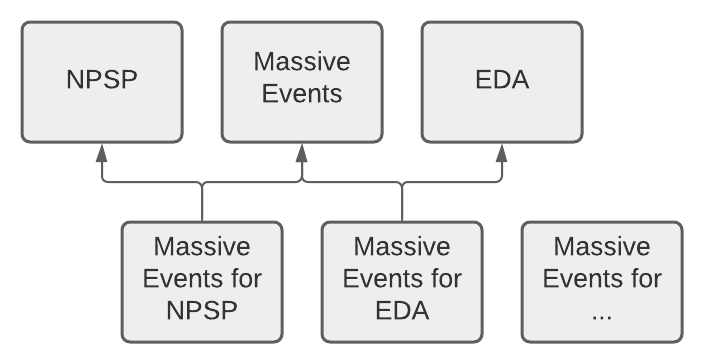 Similarly, an NPSP extension like Massive Events might need to either interoperate with the NPSP Table Driven Trigger Management framework or use its own trigger framework if NPSP is not present. As the package architect, you could site the TDTM integration in the NPSP bridge, and either ship the Massive Events trigger framework in a Sales Cloud bridge or include it in the core application with a feature flag to inactivate it when NPSP is present. Both frameworks would call the same Apex classes in the core application to execute work, leaving mostly glue code in the bridges. That strategy reduces code duplication and helps keep the configuration space of the package as small as possible, benefiting not only developers but also the support staff who handle customer cases.

Earlier, we noted that

... in a subset of cases that is challenging to define completely, it is impossible to remove a dependency between an extension package and its core package.

There are situations where removing this dependency is possible. I've done it in a production package! Whether or not it's possible is highly situation-dependent, and the procedure for executing the removal can impact current customers.

Fundamentally, if manageability rules allow you to remove the component(s) that establish the dependency from your package, or alter them to remove the dependency from the component, you can drop the package-to-package dependency. There are numerous situations where that is not possible, including but by no means limited to the Flow case referenced above and situations where a cross-package Apex reference occurs in the signature of a global method. There are others, too, where the customer impact of such a component deletion is unacceptable: if the extension package includes a field on a core package object, deleting that field and recreating it in a bridge package instead could force customers into a data migration, and might impact integrated systems as well.

It's much easier to consider these types of changes if the package hasn't already been shipped to customers. Removing references from a Permission Set, for example, is a viable strategy to remove a managed package dependency before delivery to customers, but has moderate potential impact on existing users.

If there's a single takeaway I want to offer, it's this: package architecture and dependency is worth thinking through with great care. Decisions you make at the very beginning of your application's life have long-term and potentially indelible impact. In many circumstances, making a small extra investment in package architecture can pay off in the form of the ability to pivot to new use cases and address new markets seamlessly.